Born in 2016, before the War of Division, to a family of lower class workers in Portland. Samantha grew up scavenging and hunting to survive. When she was 21 she joined the Oregon National Guard and was almost immediately tossed into the social turmoil of the Division. Her first deployment, Portland, saw her go from green recruit to seasoned veteran. The motorized rifle company she served in would see the heaviest fighting of any outfit during the battle of Portland, and would be awarded with the Cascadian Medal of Valor for their exploits. After her military service came to an end, she began work as a police officer, working for the organized crime/gang unit of Seattle's Civil Protection. The skills she honed and perfected during the war would propel her further up the chain until she was commanding a Federal Security SWAT team. When the Freedom Insurgency emerged, she volunteered to join the Joint Task Force and put a stop to the actions of the terrorists. A Private Security Contractor, working under the banner of United Security LLC. Born in Ontario, Canada, Arthur was a troublemaker in his youth. Drinking and fighting became regular pastimes of his by age 21. After a particularly nasty barfight, Arthur decided he needed structure to his life. He joined the Canadian military, went to war, and found that he was exceptionally talented at it. He was offered a contract by a fellow JTF2 operator and he accepted without hesitation. He spent the next ten years trotting the globe; From Venezuela to Ukraine, there wasn't a conflict zone he wasn't present at. This, of course, harmed his home life -and his wife would divorce him in early 2044. Feeling jilted, abandoned by his former life, he opted to invest his life in his work. He applied and was selected for the Special Projects unit of USEC later that year. Now he serves as one of USEC's top contractors. 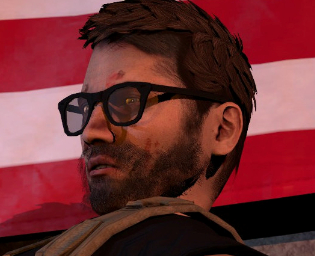 Marcus grew up in the rural Idaho town of Salmon. When he was 18, he joined the United States Marine Corps. and specialized as a Recon Marine. During the War of Division, he abandoned his post and took with him those he deemed worthy. They set out across the west, robbing and killing anyone who stood between them and their next home. Marc would later go on to amass a following of over 200,000 people. 200,000 fighters, ready to die  in order to realize his goal; Bringing the old USA back to life, uniting the divided naiton. Addicted to narcotics, riddled with diseases and addled with age, Marcus is seen as someone with absolutely nothing to lose. He will stop at nothing to see the flags of the new world cast into the fires of liberation.